There are three types of flour used to make layered kueh with different texture
Sago flour gives a chewy lighter texture, rice flour for more dense and less chewy texture and plain flour for light and steamed cake kind of texture
Of course each type uses not only one type of flour but a mixture of two usually
Long time ago before I started this blog I have tried the plain flour version, this time is the rice flour
DH prefers the sago flour version apparently, so I will definitely try that too next time

Steamed layered kueh is indeed time consuming in the process but at least I still can depend on the timer and do other chores at the same time, unlike baked layered cake (kueh lapis) which requires your 100% continuous observation throughout the whole process, sitting (or standing) in front of the oven (even though I must admit kueh lapis is really worth the effort! ^_^)

Ok, why I decided to make this kueh? Not once I ever had the intention of making this kueh, but I changed my mind after I found out that Abby loves this
It's the first traditional kueh she likes and so far it's still the only one :)
She will slowly eat this kueh peeling layer by layer :)

Colors are chosen by Abby, aren't they the best match ever? :) 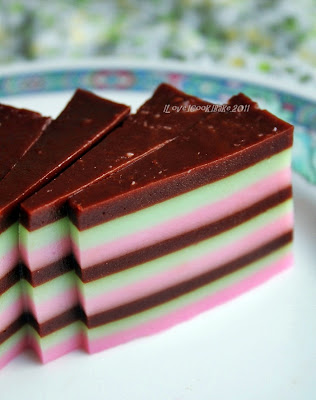 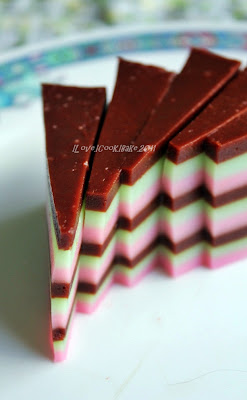 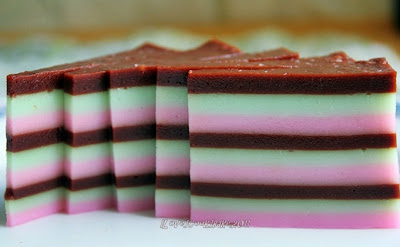 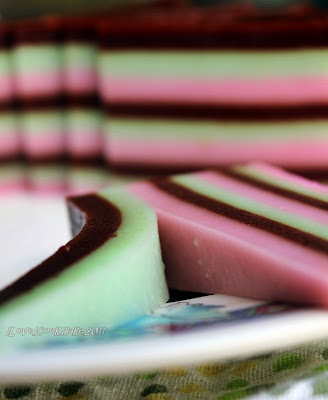 Recipe is from NCC

Prepare 18x18x8cm square pan, brush lightly with cooking oil, lay a heatproof plastic and brush again with cooking oil
Wrap the steamer cover with clean cloth
Bring to boil coconut milk mixture and pandan leaves while stirring continuously, off heat, let cool
Mix together in a bowl sago flour, rice flour, salt and sugar
Pour in coconut milk gradually while kneading the mixture til forms runny batter (I use balloon whisk)
Divide the batter into three, one mixed with a few drops of pink coloring, another one mixed with a few drops of pandan paste, and the last one mixed with 2 tsp chocolate paste
Put the pan in the steamer, let the steamer hot and start with pouring 100ml of pink batter, steam for 10minutes, followed by 100ml of green batter, steam for 10minutes, the next one is 100ml chocolate batter, steam for 10minutes
Continue til batter finished, the last layer is to steam for 20minutes
I spent 2 hours for the steaming process