This is a special request from Abby since last July ever since she saw me making car cake for Ian's birthday :) 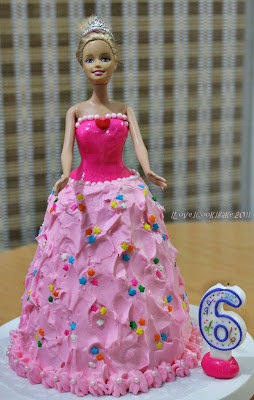 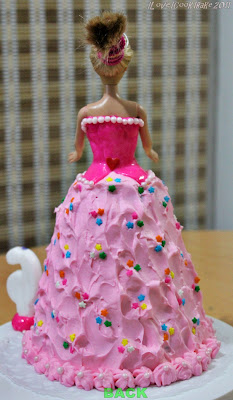 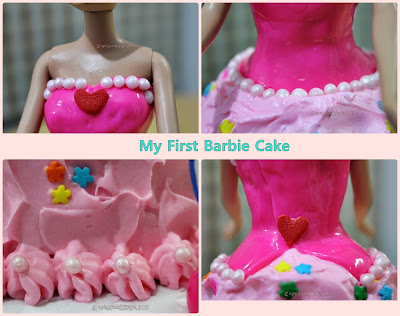 I don't have the pan designed to bake Barbie dress, so ﻿what I did was... I baked two recipes of cocoa butter cake (I didn't give marble effect this time, instead I poured the vanilla butter first and the cocoa batter on top)
I used three round pans in different sizes - 6", 5" and 3" (in fact I still had some leftovers so I baked another one in 5" pan)
To make the dress...
After cooled,  I made a hole at the centre of each cake (approximately 7cm diameter), stacked the three cakes, 6" at the bottom, topped with the 5" and the last one was the 3" cake, with buttercream frost in between
Using serrated knife, I carved the cake to shape a long dress (just using my imagination)
After done, I frosted the whole cake with buttercream, smoothen it up and kept it in the fridge for around one hour
After that, I frosted the whole cake again, this time a thick one, and I decided to give swirl effect all over the cake (this is much easier to be done on a thick buttercream)
I then inserted the doll which has been wrapped tightly with clingwrap from chest down
I added some frosting to cover the hole around the waist area and do the swirls also
I piped the edge of the dress with star nozzle and put sugar pearls on each star
Also I decorated the dress with sugar stars all over so that it wouldn't look too plain
Now, for the bodice....I initially planned to pipe all over with small star nozzle, then I realized I don't have any wew...
So I decided on fondant, I cut a rectangle shape and wrap all around the top part of the doll
Press here and there to adjust the bodice to get the perfect shape
I added some sugar pearls and hearts to beautify the bodice
That's all, sounds easy but for first timer like me, especially when you know my decorating ability, it's quite a challenge :)
So glad and satisfied to see how thrilled Abby was but couldn't bear to see when it's time to cut the cake hehe... 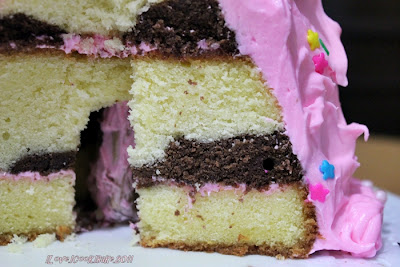 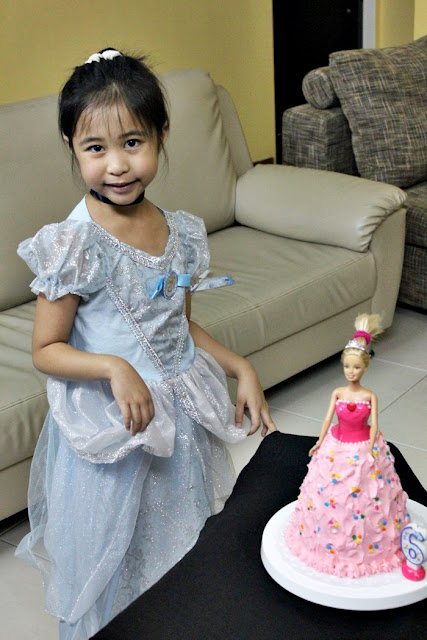 ﻿As usual, I made another cake to bring to school... Also her request, Cinderella cake, since she wore the costume to school :) 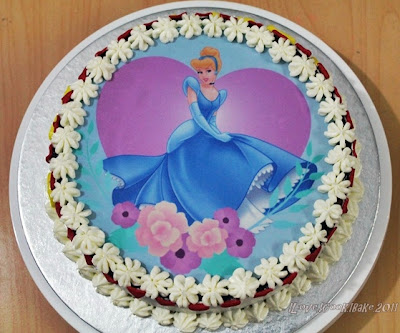 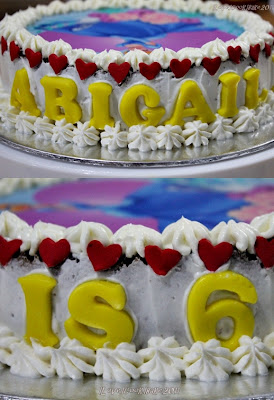 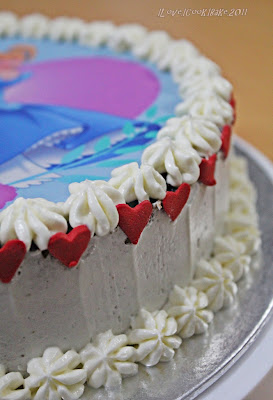 With the same cake as Barbie cake, used edible image and simple deco using buttercream
So glad to hear when Abby told me that her classmates said the cake's so yummy :)
Again, happy birthday to you my beloved Abby :) Stay pretty and good girl as always, mummy and daddy are so proud of you and will always love you, as well as you little brother, Ian.. God bless u!
XOXO
Posted by Alice at 11:26 PM