I usually make two cakes for my kids' birthdays - one to bring to school, one to eat at home
Ian's bday was a few days ago - 20th July
The one for school is already in the plan - it's a cake with edible image on top, he chose the pic himself - Lighting Mcqueen (what else *grin*)
I was more than clueless when Ian requested for a 3D car cake for his bday at home
To please the birthday boy whom is a super die hard car fanatic, I said yes, with much uncertainties in my mind (this explained my absence from updating my blog for the past few days hehe...)

I was planning to buy a car shape pan but I didn't in the end, I decided to carve the cake instead
Watching step by step tutorial in several videos in Youtube, again and again, and finally I decided to decorate the cake with fondant instead of buttercream - less hassle and I guess it'd be more fun, just like playing with playdoh - I guess, based on theory only :)
I have never ever made a fondant cake before, the only time was only decorating three small cupcakes - and it took me close to an hour for those three lil things *lol

Preparing the tools and ingredients, I realized fondant related stuff is really pricey, some stuff I just closed my eyes and told myself it's a one time investment hehe...
And the fondant itself, gee...I guess next time I will just make myself, but it's involving kneading - alot! so, gotta see other factors too like time, energy and the most important - mood! :)

Okay, so all tools and ingredients ready, and the war began...it took me two days to prepare the two birthday cakes, two hectic busy days - I should have been able to be more relax in the process if I didn't have to care for the kids and house at the same time! *faint*
Well, I too have to thank my family for their understanding cos these two days I didn't cook at all for them hihi...
I guess it's not only time constraint, but also mental pressure that made me feel so tired hehe...

In the end, whatever I felt during those two days were gone instantly when I saw Ian's eyes full of excitement, he was so delighted to see the car :)
Now I fully know, whats the meaning of self satisfaction when people love your creation, especially if it's your loved one :)
It makes you want to do even more, much more!

And to my surprise, I found out that I really enjoy playing with fondant! :)
But the most painful part was when you saw the cake being cut in seconds! *lol

So, here it is... I must say, it's still far from perfect, but knowing that my skill level in decorating is below ground zero, I can't help but feel proud of myself hihihi :) 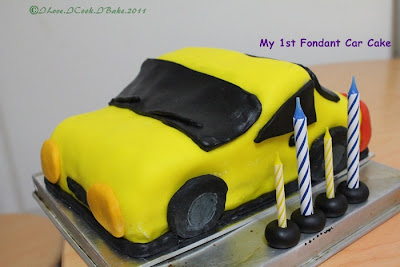 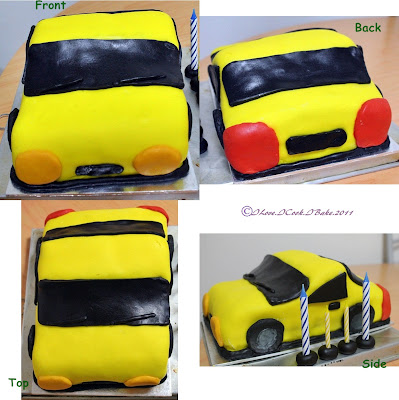 The cake is Devil's Food Cake I made before ﻿- I made two recipes (leftovers were gone in seconds hihihi...)

Stacked them up with buttercream filling in between, shaped it like a car with a long knife utilizing my imagination to the maximum, covered the whole cake with buttercream, let it set in the fridge for a few hours

Rolled the yellow fondant with the most expensive baking stuff I ever bought - PME fondant rolling pin (ppfff...), took the cake out from the fridge, cover it up with the yellow fondant, press press press...cut the remaining fondant at the sides with pizza cutter, smoothen with fondant smoother all over

I put the cake in my aircon room overnight (to prevent hot and humid Singapore weather)
The next day, on the birthday date itself, I did the deco

Here is the happy boy - slicing my two days of hard work hihihi.... 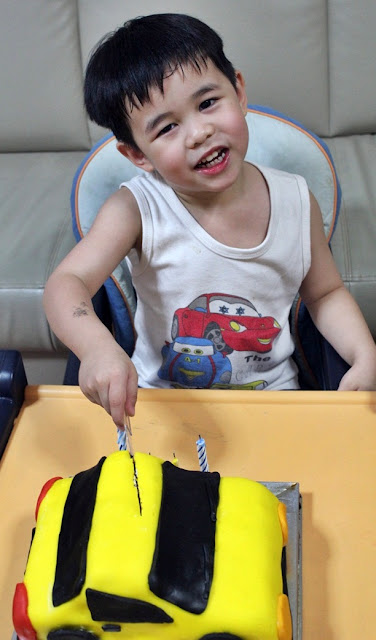 After the brutal action done by him... 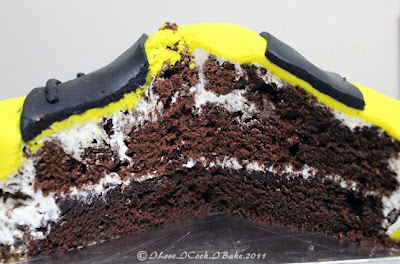 Oh before I forgot, here is the cake I made for his school... 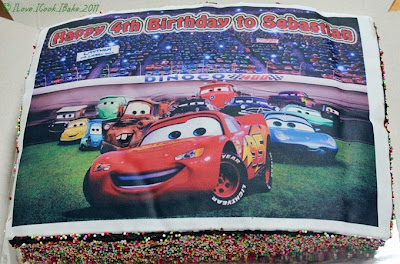 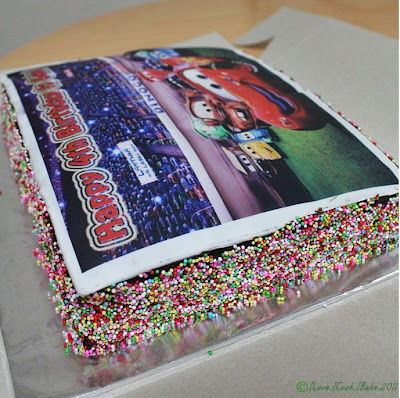 ﻿
I was not pleased with this cake at all, I am not til now - I could have done better
The cake is moist chocolate cake I made for Abby's bday last year - delicious!
The difference is this cake is much bigger, I made two recipes in two pans and stacked them up together

Now, I had no idea that this cake is so fragile that it's a no no to lift it up, so when I did, it cracked into four parts - I was so panicky at that time and ready to bake another one recipe but then I tried to patch them up together like making a puzzle using buttercream as the 'glue' and it worked, so I just went ahead to paste the edible image - picture chosen by Ian himself :)

After everything done, I realized that the cracks were visible - but I couldn't do anything so no choice..
And also, cos the top cake was cracked, I didn't dare to cut the top part to level it up, so the cake did not have flat top - I only tried to make it as smooth as possible
Well, never mind the cracks, Ian and his friends' jaws were still dropped when saw this cake - hehe....

So....aside from all he hiccups, I really did have fun doing it
What a delight to see Ian very excited to have his mummy's amateur creations hihihi....