Please don't laugh when you see the pics below
It's 100% intention in baking galette but turned out to be pizza like, I didn't know whether I should cry or laugh LOL

My galette pizza - that's how I named it, it's a miracle that I still could see the edges, even though it sagged and couldn't cover the fruits at the sides
If you see there's one point on the right side where some of the juices has leaked out during baking 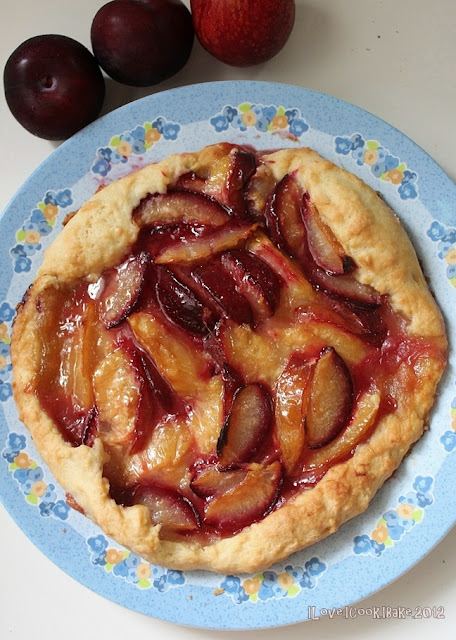 It started when I decided to make half of the recipe
I did write down in the book - the quantity I needed for half recipe, but somehow I misread some
One, the amount of water for the dough was 30 ml (half recipe)
I was dreaming - I'm sure, that I read it as 300ml and I realized it when I have poured all
I quickly poured the balance of the water but I guess some has mixed up with the dry ingredients
Two, I misread the quantity of the lemon juice. It should have been 1 tbsp for half recipe, I used two
Two solid reasons for a chaotic kind of dough
I tried to add more flour and keep in the chiller for longer time, but when doing the rolling, all were back to square one
It's very fast turning to sticky dough even though I used lots of flour as a help, I had to be fast to trasnfer it to the baking tray and continue to flatten the dough by hand
Piling up the fruits at the centre and it's a nightmare when I tried to lift up all the edges, very frustrating but there's no turning back at that point of time
So I just tried the best I could and brushed it with milk and at the same time tried to lift up again with the brush
Once it's inside the oven, it started to sag slowly which I witnessed with broken heart but I couldn't do anything. Angry for being so blur wew....
After it's cooked  (about 50 minutes), I took out the tray from the oven and I could see a big pool of leaked black burnt sugar
Luckily I could easily separate the galette away from the sugar
I quickly transferred it to the serving plate and that's what you saw in the pic above

Texture of the crust was not too bad, even though I knew it should have been better
Taste wise, it's good but it looked a little wrinkly here and there

For the filling, I followed the recipe exactly - halved
it's funny how these fruits were still so sour after the additional sugar I made
Yes, the black plums were sour, but the pluots were real sweet and also the sweet glaze, not to forget. Perhaps I just omit the lemon juice the next time I bake this again using not so sweet fruits 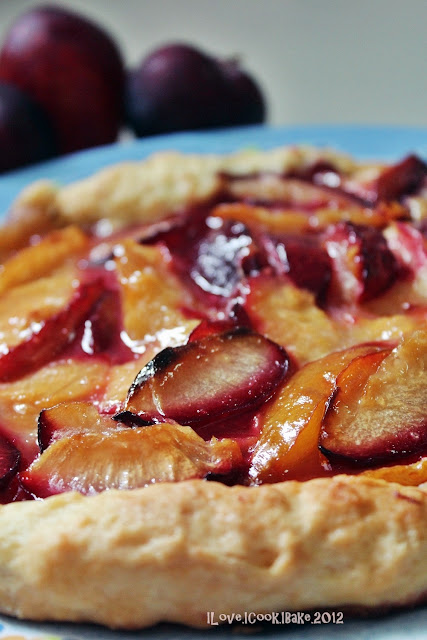 These are the fruits I used, one at the left side is pluot and two at the right side are black plums 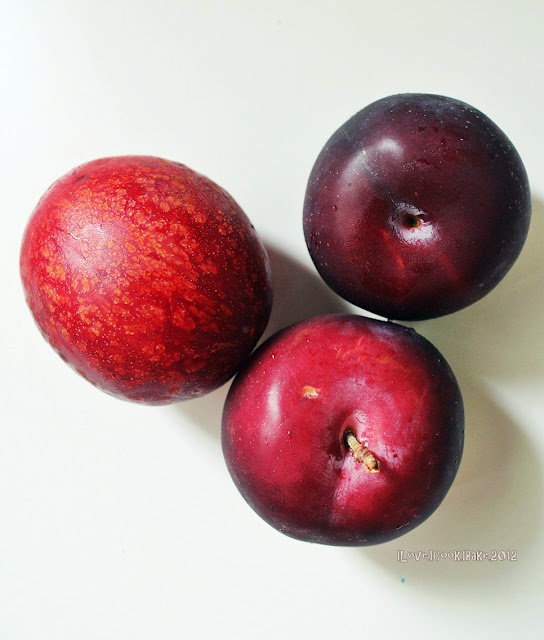 Please hop on ABC's site to view other bakers' galettes 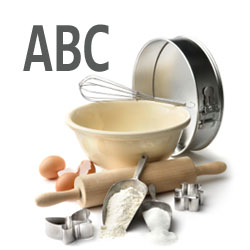