Rugelach? What's that? That's what I thought when I saw the Bake Along to do list
I googled and I was looking at those little cute croissant-like munchies
Oh it's pastry with filling.. But when I read again.. Oh it's cookies, Jewish cookies
Okay, whatever it is, wherever it's from, it looks real good so I wanted to give it a try

Then I read... Oh, many mixed reviews about Dorie's recipe.. Perhaps I should just cross this out for my first time trial
Ina's recipe looks good with many rave reviews, so is Nigella's
After much consideration, I finally chose Ina's recipe, since I have had many Nigella's cooking lately :) 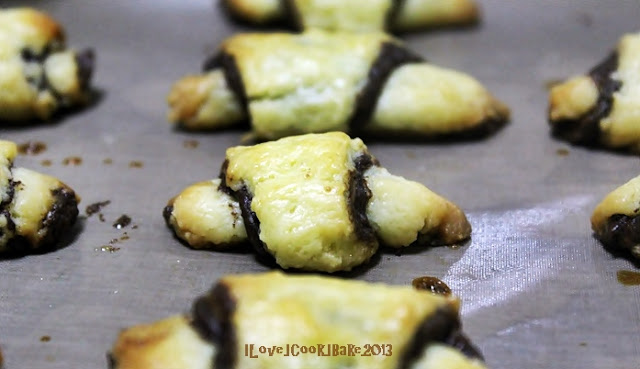 I wasn't too pleased with the result. Not the taste, no.. Believe me, this was just delicious and addictive!
I'm talking about the shape. The crescent shape
The dough was soft that more refrigeration required than what stated in the recipe. After 3 hours chilling, I took the dough out and rolled, it took so fast to get the dough to turn soft again, and it's worse after spreading the Nutella
I tried to roll and it's just impossible. So I put the whole round sliced to 12 triangles back to the fridge and kept chilled for about 45 minutes (I reckoned it's still not long enough, perhaps 1 hour 30 minutes to 2 hours will do just fine)
It helped in making rolling the dough easier but still it turned soft too fast so I had to move quickly hence the not so satisfying end result :P

What you need:
Source HERE
(below is half recipe)

For the filling, I chose the easy way out, the surely loved Nutella :)


I must say this was one delicious cookies. With Nutella as the filling, it's really difficult to resist them, including the kids, too :)

It was pretty late when I finished baking the first half, so I kept the other disc in the chiller
I plan to use the original filling this time, perhaps tomorrow, we'll see :)
Hopefully I will have more luck in making better crescent shape hahaha... 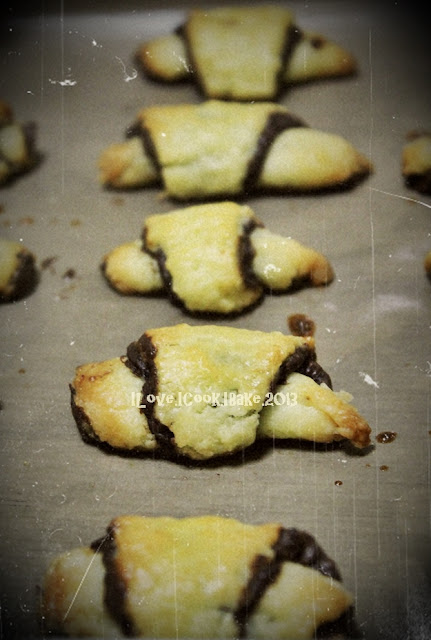 Last but not least, announcement!
The giveaways for my 3rd year blog anniversary has officially ended
Stay tune for the result tomorrow :)